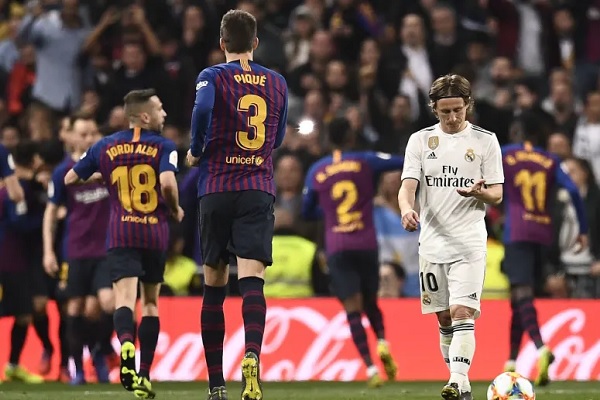 A giant Real Madrid flag unveiled behind Keylor Navas’ goal in the first half or the anthemic chants of Los Blancos‘ supporters could not change the fact that this El Clásico was different from many previous ones. Without Cristiano Ronaldo leading the line, Gareth Bale carving out space on the right wing or Marcelo bombing down the left flank, the hosts’ squad only faintly resembled the eleven that lifted three consecutive Champions’ Cups.

Their objectives were also different – after snatching a deserved 1-1 from the gates of Camp Nou, all they needed in a rematch was a goalless draw. This obviously influenced the tactical shape for the game: on Wednesday, Solari’s men came out of the tunnel with both Casemiro and Modrić operating very deep, Lucas Vázquez glued to the right byline and Vinícius Júnior being the sole player relived of defensive duties.

It worked better than expected. For 45 minutes, Real were pulling the strings in a game that Blaugrana were supposed to dominate in their hunt for a goal that would change the course of the tie. Casemiro had a truly inspiring performance, reducing Leo Messi to just two menacing runs through the middle the Argentinian couldn’t even crown with a single shot. Vázquez’s stellar defensive work has dealt with Dembélé nicely and the visitors got to the half-time without a single shot on target.

Meanwhile, at the other end, Vinícius was fighting as if his life depended on it. Facing both Nelson Semedo and Sergi Roberto, the Brazilian looked too quick and too skilled to handle. Already his first shot should’ve found the back of the net – set up by Benzema, it sailed over the bar from a position that was just begging for an accurate finish. Four minutes later, the teenager nearly assisted Benzema – only to fluff a resulting rebound himself.

A doctorate will need to be written on how the wonderkid failed to score or at least set up a goal in this match. 36th min – he chases Casemiro’s pass, squares it to Benzema and the Frenchman’s shot is saved by ter Stegen; 55th min – he leaves Piqué for dead and only Busquets’ perfect tackle stops him in the box; 62nd min – he outwits Semedo, produces a great cross but the resulting header is saved; 66th min – he drops three defenders to the ground before attempting a technical shot that missed the far post by inches…

While one talented youngster kept creating and wasting awesome opportunities, his Barcelona counterpart displayed much less brilliance, but much more efficiency. Dembélé started the match by dribbling himself into oblivion and fruitlessly losing the ball twice – hinting that this might turn out to be yet another disasterclass in his underwhelming Blaugrana career. Alas – after the break, he was finally offered to burn some of his pace on the counterattack, finishing the game with two assists and deserved praises from teammates.

For Madrid, the hell broke loose five minutes inside the second half. They’ve been on the front foot. They’ve lined up multiple shots before the break. Just after it ended, Vázquez drew a free-kick that nearly ended with Benzema’s goal. Everything was fine. Until Toni Kroos misplaced a long ball, Dani Carvajal got caught out of position and Dembélé stormed forward to chase Alba’s pass. Sergio Ramos was covering space, not the man and before he could turn his body to challenge arriving Suárez, the Uruguayan struck and scored at the near post.

The remaining 40 minutes quickly turned into a heavily entertaining exchange of blows. Madrid’s plan B was exactly the same as their plan A – to overload the left flank and hope that one of the crosses yields Benzema another sitter comparable to the 36th minute one. It made sense – Vinícius, tirelessly supported by marauding Reguilón kept causing the mayhem while Benzema’s run created a far-post vacuum for another player to exploit. Sadly, most of the time, that Real player wasn’t there to be found – and Alba or Lenglet kept extinguishing the fire by clearing the ball into the stratosphere. 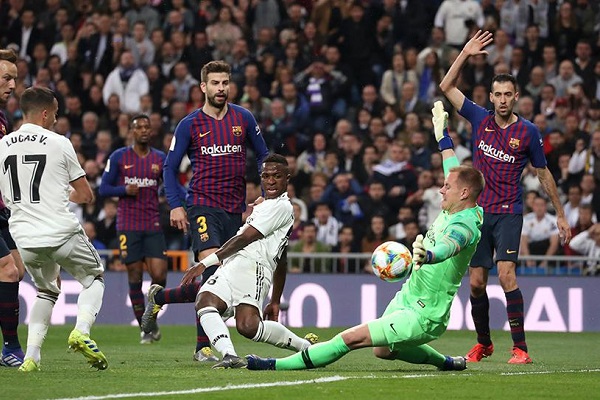 No way through for wasteful Real; ter Stegen well on top of his game again.

One thing Barça players need to take credit for is their willingness to help each other out even in the direst of troubles. Whenever far-from-his-best Sergio Busquets was getting dribbled past, Gerard Piqué would magically appear to bail him out; whenever Nelson Semedo couldn’t cut it, Clement Lenglet was stepping up to neutralize the danger. And if everything else failed, there was always ter Stegen – after all, the German’s four saves included a one-on one with Benzema and a difficult, bouncing strike from Carvajal.

Ultimately, Madrid’s downfall was completed in the circumstances they were so elegantly avoiding in the first half. Forced to play with high defensive line in order to chase an equalizer, they got exposed on the counter and Dembélé ran off completely by himself, squaring the ball for an easy tap-in. The fact that Varane squeezed in the back of the net it instead of Suárez hardly mattered – the centre-back was merely trying to fix what, at that point, was beyond repair.

Unsurprisingly, the third goal followed soon, in exactly the same manner. Seeing his teammate’s exploits, Suárez drifted out wide himself, received the pass from Alba, glided effortlessly into the box and got kicked in the shin by Casemiro’s unfortunate challenge. The Brazilian did not even contest the penalty call and his opponent soon rounded up a great performance with a sweetly executed Panenka’s chip. 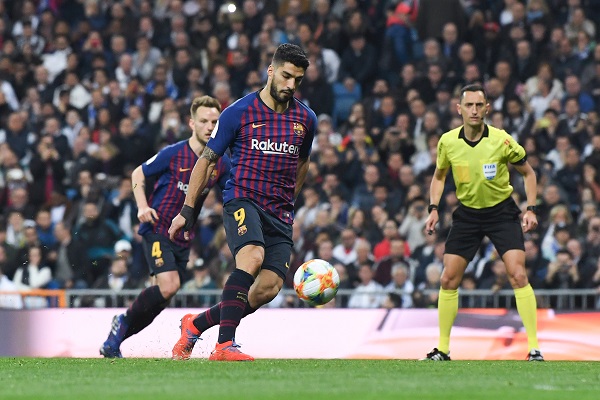 How often do you see that chip tried against the Champions League winners?

On the side of the hosts, the similar level of finishing was nowhere to be found. After wasting one big opportunity, Benzema stuck to dropping deeper and helping to spread the passes around. As a result, he never took another shot. Gareth Bale, brought on seconds before Varane’s own goal, also remained anonymous and without an attempt. Given the two’s combined age of 60 and tendency to go on dry spells, Real are soon going to need a striker with both skill and the arrogance to finish the chances by himself. In short: they’ll need Ronaldo.

But since that ship has sailed and another El Clásico has been scheduled for Saturday, Los Blancos shall try to snatch a win with the resources they have. At this point, anything other than three points definitely rules them out of the title challenge and most likely ditches a chance for a second-place finish. As both sides are expected to field the same teams, another 0-3 could be on the cards – especially since, in the words of Piqué “Barça tends to win a lot and by a lot at Bernabeu”.

One – and, perhaps, the only – hope for Madrid is the professional pride of Toni Kroos and Luka Modrić. On Wednesday, the German excelled only at misplacing long passes and providing unimpressive set-piece deliveries. The most Ballon d’Or holder has managed was not getting booked despite fouling Messi by hugging him first and then nearly ripping his shirt off. If the two don’t want to be outperformed by Casemiro again, they need to bring much more to the table on the weekend.

Other than the vanishing title chance, there’s one more motivation for Real Madrid to bounce back. Their most recent loss brings all-time El Clásico record one step closer to a seemingly inevitable tie. With 72 wins to Barcelona’s 71, the current Los Merengues team could be remembered as the one that lost the all-time Derbi Español supremacy to the sworn rivals. And, after 116 years of clear advantage in that department, no man playing for the white shirt wants that. At least not with the Champions Cup winners’ gold plaque still shining on the sleeves of their shirts…