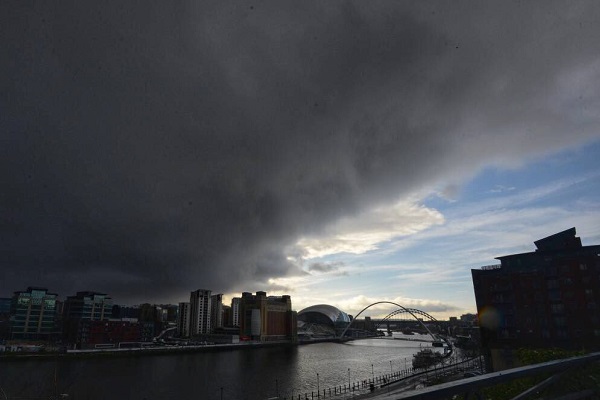 Storm over Tyneside. Not the first one.

Bad times are coming; old times are coming. Newcastle United have just lost a star manager, an important striker and, likely, a chance for a new beginning. While these words appear on people’s screens, Geordies on various forums are reconciling with the threat of relegation. Or, at best, with the thought of balancing on the edge of it in the foreseeable future.

The slide they’re anticipating is real. It has happened before. There were sales of several good players; there were failed attempts at replacing them. There was also a distinct lack of ambition. Between 2012 and 2017, Alan Pardew’s team would slowly but surely slip down in the Premier League pecking order, habitually receiving abuse from top-six opponents and constantly having the worst defensive record of all relegation survivors. Due to the lack of positivity or even overall decency in that side, not every black-and-white stripped supporter even remembers those mundane ventures.

Alas – all Geordies remember March 2016. Their team has just fifth game out of the last six, falling 1-3 at home to newly promoted Bournemouth. Before that, there was a bland 1-2 defeat at Watford, terrible 0-3 at Everton, a catastrophe at Stamford Bridge against Chelsea and a lousy 0-1 in Stoke, after 90 minutes of absolutely dire football. Manager Steve McClaren kept talking nonsense to the press about the progress he’s made with the side and how the team is just ‘unlucky’ and ‘otherwise outstanding’. At the same time, Toon were the second-worst club in the league, only ahead of absolutely hopeless Aston Villa, trailing rivals from Sunderland by a point and Norwich on goal difference.

Then, something completely unexpected happened. For once, owner Mike Ashley has done something ambitious. For once, managing director Lee Charnley has got a stupendous deal over the line. For once Newcastle United had hope injected in their veins. Rafa Benitez has joined the club on a three-year contract with massively bumped-up salary compared to McClaren’s and the reported £2 million bonus to be triggered should he manage to keep his new club in the Premier League. He had 66 days to make a difference… 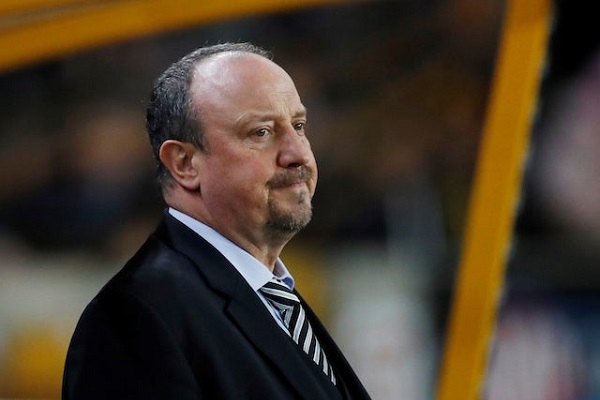 Not too little but still too late…

In the whole history of strange managerial appointments, this one has immediately raced to the top ten. Just nine weeks earlier, Rafa was settling locker room business between Gareth Bale and Cristiano Ronaldo and drawing his old side, Valencia, in La Liga at Mestalla. Before that, he’s been taking Napoli from the Europa League to the Champions League level. Before that, there was an Europa League triumph with Chelsea and before that, a Club World Cup win with Inter. And, before that, memorable six years and the Istanbul night crowned with a Champions League medal for Liverpool. If Lewis Hamilton quit F1 and went back to kart racing, the downgrade wouldn’t be greater than this.

Rafa’s 66 days weren’t enough. Appointed too late, he had a very slim chance of making the disjointed, disheartened team work. It took a month before his efforts were rewarded with the first victory – by which point, the situation was virtually beyond saving. The final bitter pill was a goalless draw with rock-bottom Aston Villa. Combined with Sunderland’s comeback win over Chelsea and Mackems’ subsequent 3-0 over Everton, it meant relegation. Not just an ordinary relegation – a relegation suffered from the hands of a local derby rival.

But then, more miracles followed. Benitez stayed. He chose life in the hell of Championship. He got rid of twelve players and brought eleven new, effectively ending an era in history of the club and starting a new one in the span of two summer months. Under his influence, Newcastle started winning – a lot. They’ve finished a year in banishment as the top-scoring and joint-best defending second-tier side. Twelve months after the Sunderland humiliation, the two clubs passed each other by: Magpies going up and Mackems going down. 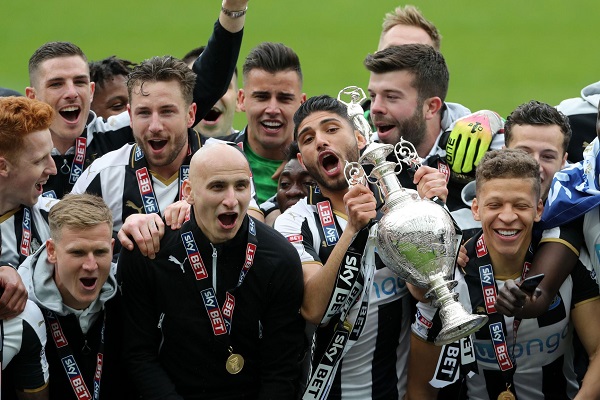 May 7th 2017. Championship trophy lift. A glimmer of hope in the sea of disappointment.

All things considered, the next two years were arguably even more of a dream. Operating at a net spend of just £36 million, the Spanish boss has managed to comfortably keep his club up – all while the sides like West Brom (£46 million net spend in a year) Huddersfield (£70 million in two years) or Fulham (£100 million in a year) have been relegated. No final-day saves or panic January solutions were needed: the Toon were simply hard to beat, prolific at set pieces and staffed with inexpensive players collectively punching above their weight. Hard-fought home wins over Arsenal, Chelsea, Manchester United and Manchester City only boosted the overall positive picture – even if the picture was nothing more than a low-budget, low-profile grind.

Today, the grind has got even thinner. By now, every manager in the world knows what to expect at Newcastle. Everyone understands that working at St. James’ Park means dealing with a miserly chairman, a brown-nosed director, bang average backroom staff and sub-par squad with zero prospects of being strengthened. Everyone knows that the club with likely the most devoted fanbase in England is on a downward spiral, with little to be won and a lot to be lost. Whether your name is Roberto Martinez, Patrick Vieira or Sam Allardyce, you’re most definitely aware of this particular job’s hazards.

On of the dangers is materializing already. Shortly after sending Salomón Rondón back to West Bromwich, the club has lost it’s other main goalscorer, Ayoze Pérez. The Spaniard’s been around for five long years, making slow but steady progress after joining the Toon from Tenerife as a completely anonymous prospect. During his stay in the north, Pérez’s been known as a textbook streaky player, often finding goalscoring form late in the season, often stringing several returns after long, dry spells. With 12 league goals last season, he was the best Magpies had left in terms of finishing. Today, as we speak, that aspect of the game is in the hands of Joselu (10 PL goals in three seasons) and Yoshinori Muto (one PL goal).

It could go from bad to worse. Team’s brightest prospect, Sean Longstaff has reportedly found himself under Manchester United’s scrutiny. After just eight league appearances and one goal, the 21-years old appeared on Ole Gunnar Solskjær’s radar as a part of the plan to bring more young, homegrown talent to Old Trafford. He might as well be tempted to leave. Again: not just because of the wages he can pull or the reputation he can have in Manchester – but because, frankly speaking, the future for young players in Newcastle looks grim. 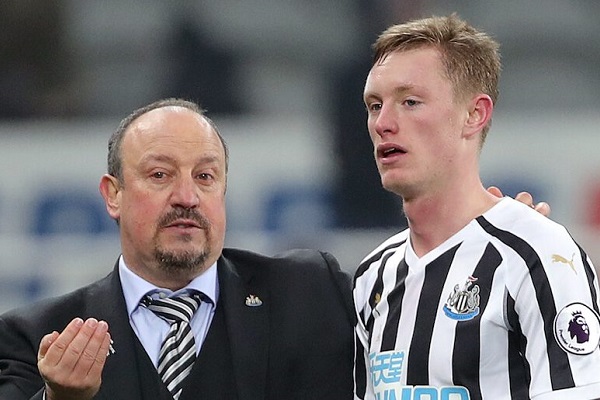 “Look, Sean. You see how things are around here yourself. It’s your call.”

Which manager will be there to pick up the pieces? At the moment, the vast majority of bookies are glancing at Mikel Arteta. Pep Guardiola’s assistant has spent three fruitful years in Manchester and has carried a serious gaffer potential since 2018, when his name was mentioned in the speculations regarding Arsenal’s future. But there’s the catch: Citizens might be secretly hoping that Arteta replaces Guardiola seamlessly one day – and the man in question might be setting himself up for it too. At any rate, his unlikely step down from PL champions to Mike Ashley’s world would’ve been likely a bit of a shock for both parties involved.

Because, at the end of the day, it’s still Mike Ashley’s bizarre kingdom. Ever since he’s bought 41 percent of it’s shares in May 2007, the elusive businessman has been pulling strings at St. James’ Park in a manner that varied from very decent to downwards insulting. In 2009, he’d announce the stadium name change to Sports Direct Arena – only to retract this decision and apologize to the fans four years later. In 2015, he’d authorize the signings in excess of £80 million – only to put that money into the hands of the head scout Graham Carr, who’d contract a group of terrible flops. Rafa Benitez and the story of his unsuccessful contract extension that led to the Spaniard’s departure is yet another disappointment from the London billionaire.

More letdowns could be around the corner in this field too. Two years after Amanda Staveley’s failed £300 million takeover bid, nine months after the brief takeover talks with Peter Kenyon fell through, another chance of putting NUFC in better hands seems to be on the verge of collapsing. Sheikh Khalid Bin Zayed al Nahyan and his Abu Dhabi-based BZG Group have been on everyone’s lips for well over a month but not much has come out of it – other than the vague, third-party reports that the deal has been supposedly “agreed”. That enigmatic confirmation has come out good six weeks ago. Stuck at refreshing their social media feeds, the fans are still waiting for more details…